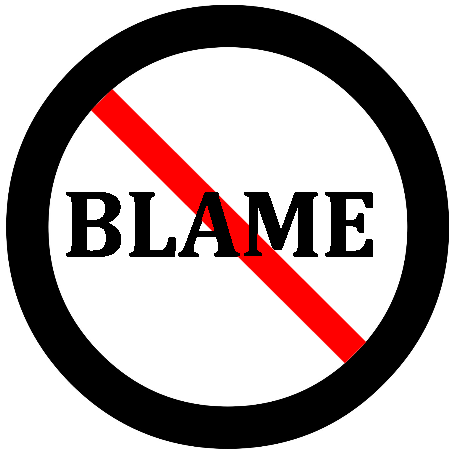 Unfortunately, blaming is as destructive as it is pervasive. The urge to blame affects all of us to some degree—it is almost instinctive, especially if we have been raised in harsh and punitive families. Blaming others for our own actions and reactions not only damages relationships, it also keeps us from learning and growing. Part of taking accountability in recovery includes stopping blaming others for our actions and reactions.

When we blame others, we do one or both of two possible things:

Here are some examples of blaming behaviors:

In each of the above examples, the blamer holds somebody else responsible for their actions or feelings. Why do we do this? Because for some, to take accountability for our own actions and for managing the way we feel is intolerable. To do so would be to be irrevocably bad, just as we judge others to be bad. Blaming is thus rooted in part in fear—fear that we are not worthy and valuable despite our mistakes and imperfections. We are especially vulnerable to blame others for bad behavior that we also engage in. Thus the saying, “you spot it, you got it.” Blamers hold the unrealistic belief that they cannot be imperfect and make mistakes. They link imperfection to defectiveness. They mistakenly link their actions to their self-worth, so all unskillful actions must be justified by make them someone else’s fault. In this way, we are never responsible for what happens around us or to us. To blame is to be completely unaccountable out of fear of accountability. If we were to take accountability, by the blamer’s reasoning, we too would be unworthy and deserving of mistreatment.

Blaming is also fueled by entitlement—that we have a right to judge, mistreat or disregard others, or to do whatever we want regardless of the harmful consequences. Blamers often have a lack of awareness of how their actions affect others. They see life as if through a one-way mirror, only seeing how others affect them. They will keep an inventory of all the wrongs that have been done to them, completely unaware of the wrongs they have done to others. Their entitlement to behave hurtfully and with disregard for others allows them to offend others from the victim position. In the extreme, blamers will beat, or even kill, over a perceived wrong, and have no remorse.

Another form of entitlement is selfishness, in which we do for ourselves without regard for the harm we cause others. The classic example of this is the person lost in the disease of addiction, who drinks or drugs, lies, steals, and manipulates, with no regard for those they hurt, but instead blaming others for others’ reactions to their destructive behavior.

Although others may and do engage in bad behavior, it never justifies making them bad and then using that as an excuse for treating them badly. Blamers lack humility and respect when they blame and then act hurtfully towards the “blamee.” Blamers blame in order to give themselves permission to mistreat others, rather than addressing injustices with care and respect for the other person. By devaluing others, we justify punishing them for some bad outcome or behavior.

There is a difference between blaming and holding other’s accountable. When we blame, we make someone else responsible both for an event and for our response to it, without taking accountability for our role in the event or for our reaction. When we hold others accountable, on the other hand, we hold them responsible for their actions while also holding ourselves accountable for our actions. Thus we might hold someone accountable for paying back the $100 they stole from us, rather than beating them up or slashing their tires.

A common form of blame is to blame others for our hurt and anger, rather than taking responsibility for our emotional reactions to others. While fear, hurt, and anger are all common and normal emotional reactions at times, we are still ultimately accountable for how we process these emotions. As Eleanor Roosevelt once said, “no one can make us feel bad without our permission.” We manage our anger, for example, by dropping unrealistic expectations and practicing acceptance of that which we cannot change. Whatever our emotional reaction to others, we are ultimately accountable for how we feel and for our reactions to our feelings, no one else.

Blaming destroys relationships, damages lives, and causes much unnecessary pain, stress, and turmoil. The stress resulting from blaming can trigger a relapse. Blamers not only hurt others, but, true to the law of karma, they suffer from failed jobs and relationships, and often invite harm, such as when they mistreat someone and that person retaliates. All too often we hear of drivers who have flipped off another driver, only to have that driver stop and severely beat or even kill the person who flipped them off. Blaming is bad for everyone.

Another consequence of blaming is that the blamer, by alienating healthy, mature, accountable, respectful people, finds himself or herself spiraling downward into either social isolation or into a social circle of similarly destructive and low-functioning blamers. After all, birds of a feather flock together. To say the least, blaming can lead to a very unhappy social life.

There is a solution to blaming, however. It starts with awareness of when we are blaming. Other people, especially mature, healthy people, can help us with this if we only make a commitment to listen to their feedback. When we notice we are blaming, we need to stop and reflect, with humility and self-acceptance, upon what happened, and our role in the situation. We then need to take accountability for our own behavior. We are not victims. We are responsible both for what we bring upon ourselves and also for what we let others do to us when we fail to assert ourselves. If someone bumps into us because we weren’t looking where we were going, we need to own that this might not have happened if we had been paying attention. Accepting our bad behavior does not make us bad if we simply acknowledge that we are all imperfect people living in an imperfect world. Without the life-and-death need to protect the illusion of infallibility, we can give up the judge, jury, and punisher roles when bad things happen. We can let go of faultfinding and focus on what to do to improve things.

In addition to awareness and self-acceptance, coupled with self-responsibility for our contribution, if any, to a bad outcome, we also need to own our emotional reactions and actions in response to unhappy events. We, and only we, are ultimately responsible for our actions and reactions. We need to commit to unconditional respect for others. Part of respect is giving up any entitlement we might have to behave selfishly or otherwise destructively. We need to stop using and abusing others. We need to take a personal vow of no harm, which includes not blaming others. We need to do the psychological work necessary to work through our negative emotions so that we can take care of ourselves while respecting others.

As with all recovery skills, living a blame-free life requires practice, patience, and persistence. Stopping this destructive behavior greatly improves the quality of our lives as well at those around us.

Get exclusive access to Dr. McGee’s teachings and a supportive online community that cares.

Free Trial
We use cookies on our website to give you the most relevant experience by remembering your preferences and repeat visits. By clicking “Accept”, you consent to the use of ALL the cookies.
Cookie settingsACCEPT
Manage consent